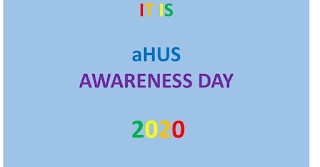 aHUS Awareness Day is observed on 24th September every year. The date was picked by members of the aHUS Alliance, an umbrella group of patient organisations from around the world. It started being observed only 5-6 years ago as that was around when the Alliance was formed. Every year, a flurry of activity is seen around this date. People from all over the world participate in various activities like videos of hope by patients, dissemination of information among the public and a lot of education about the disease.

And yet, with every passing year, while some countries move from one successful drug to another, Indian patients continue to die or be condemned to a life on dialysis. Some do recover after the initial flare but these are only a small proportion of the total.

I started The Atypical HUS India Foundation a few years back with the intent of providing information and support to Indian aHUS patients and their family members. When I was diagnosed way back in 1997, there was hardly anything that was known about this disease. We scoured the internet only to find small bits of information here and there. I thought having a website and social media accounts that provided information and support to Indian patients would provide at least some hope.

I was only partially correct.

When people get diagnosed and come across the aHUS India Foundation, their first question is what is the solution? They somehow cannot get their heads around a diagnosis that has a cure but is not available in India. What are the other options, they ask? My heart sinks when I get this question because I hate to have to tell them that there are no other options. Is there a way to get Eculizumab to India? There are some shady companies that claim to be able to get it to India but the quality is doubtful and the price is beyond the reach of anyone but maybe the top 0.0001% of Indians.

The US is now moving on from Eculizumab to Ravulizumab. The infusion frequency is reduced and patients would need to go only once every 1-2 months, roughly half the number of visits that Eculizumab required. Other developed countries will soon evaluate this new drug as well.

Several other drugs are supposed to be in various stages of clinical trials. The concern however is even if these drugs get approved eventually (several years from now), will they ever be brought to India? How would they be priced?

The curse of this disease is many fold. On the one hand is the severity of the disease. On the other hand is the miniscule number of patients that exist. Any drug that pharmaceutical companies develop has only a few patients to profit from. So each patient is charged a bomb.

I hate to sound negative. But the situation is hopeless. Unfortunately, I just do not see things changing in the near future at all. In India, even basic healthcare problems are far for being resolved. Just to take one example, India's infant mortality stands at 32 per 1000 births compared to the US's 5.7 and the UK's 3.9. This is hardly surprising when you see that India spends about 3.6% of its GDP on healthcare (of this, government spending is a shocking 1.3%) while the US spends about 18% and the UK spends about 10%.

So, the problems are aplenty and the resources are few. In this dire state of affairs, how can we expect the Indian government to spend massive sums of money on drugs that will save only a few lives? If the money spent on one patient's cost of Eculizumab is spent on improving infant mortality for example, by strengthening the primary healthcare centre infrastructure in a rural village, several hundred lives can be saved. Which investment offers a better return?

And yet, try explaining that to Ananya's father. He has no clue about GDP figures and healthcare budgets. All he knows is that he lost his beautiful little daughter when there was a drug available that could cure her. But it was simply an accident of geography coupled with a cruel accident of genetics that took her away forever.

The aHUS Alliance Action comes out with a fact sheet every year which is an excellent resource of the latest information available from the aHUS world comprising of new research, status of new drugs for aHUS and so on.